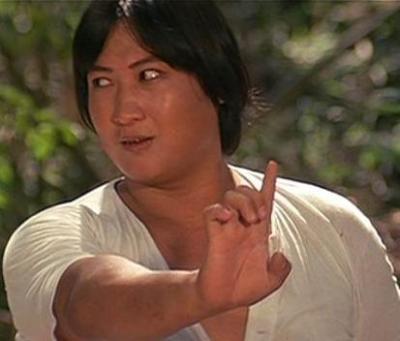 Hung was among the pivotal figures who, spearheading the Hong Kong New Wave move

Born Hong Jin-bao in Hong Kong, both of his parents worked in the local film industry and guardianship was thrust upon his grandparents.

Hung joined the Master Yu Jim Yuen Opera Academy in 1959, after his grandparents heard about the school from their friends. Hung, who was known as Yuen Lung in the Seven Little Fortunes (七小福) performing group, would establish a school rivalry with one of the younger students, Yuen Lo. Yuen Lo would go on to become none other than international superstar Jackie Chan. Hung left the Academy after an injury left him bedridden for an extended time, during which his weight ballooned. After finding work in the film industry as a stuntman, he was given a nickname after a well-known Chinese cartoon character, Sam-mo (三毛; Three Hairs).

In 1988, Hung starred in Alex Law’s Painted Faces, a dramatic retelling of his experiences at the Peking Opera School. Among the exercises featured in the movie are numerous acrobatic backflips, and hours of handstands performed against a wall. Despite some of the more brutal exercises and physical punishments shown in Painted Faces, Hung and the rest of the Seven Little Fortunes consider the movie a toned-down version of their own experiences.

Hung appeared in several children’s movies in the 1960s, but it was not until the 1970s that his career began in earnest. Hung began working for Raymond Chow and the Golden Harvest company and was initially hired to choreograph The Fast Sword (1970). Hung’s popularity soon began to increase, and due to the quality of his choreography and disciplined approach to his work, he caught the eye of celebrated Taiwanese director King Hu. Hung choreographed two of Hu’s movies: A Touch Of Zen (1971) and The Fate Of Lee Khan (1973).

Also 1973, he was seen in the ultimate Bruce Lee classic, Enter the Dragon. Hung was the Shaolin student Bruce faces in the opening sequence.

In 1977, Hung made his directorial debut with The Iron Fisted Monk.

After Jackie Chan’s success with Drunken Master (1978), Hung was scheduled to make a similar movie featuring Yuen Siu Tien (aka Simon Yuen) from Drunken Master. As Jackie’s elder, Sammo was supposed to be able to surpass him in popularity. The movie was called Magnificent Butcher (1979) and during filming Yuen Siu Tien died of a heart attack. He was replaced by Hoi San Lee and it is likely that his absence is what led to the low ticket sales.

Toward the late 1970s, Hong Kong cinema began to shift away from the Mandarin-language, epic martial arts movies popularized by directors such as Chang Cheh. In a series of movies, Hung, along with Jackie Chan, began reinterpreting the genre by making Cantonese comedy Kung Fu. While these movies still strongly featured Kung Fu, they also feature a liberal mixture of humour.

As Hung’s star began to rise, he used his newly-found influence to assist his former Opera classmates. Aside from regular collaborations with Chan, others such as Yuen Biao and Yuen Wah also began to make appearances in his films.

In 1978 and 1981, Hung made two movies that are considered to contain the best examples of wing chun. The first, Warriors Two was the biggest role for Korean superkicker Casanova Wong, who teams with Hung in the final fight.

The second film, The Prodigal Son, shot fellow Opera schoolmate Yuen Biao to stardom. It also featured what is considered to be some of the best wing chun caught on film, performed by Lam Ching-Ying.

In 1983, the collaboration between Hung, Jackie Chan, and Yuen Biao began with Jackie Chan’s Project A. Hung, Chan and Yuen were known as the ‘Three Dragons’. Their alliance lasted 5 years, with Dragons Forever being their final film to date.

Hung also created the hopping vampire genre with two landmark movies – Close Encounters Of The Spooky Kind (1981) and The Dead And The Deadly (1983). Both movies feature vampires who, as stiffened corpses, move by hopping, and Taoist priests who are able to quell these vampires (and at times, each other) through magical spells and charms. These films meld Chinese folk beliefs with special effects and breathtaking kung fu to create a genre that is uniquely Chinese. Hung’s movie would later pave the way for movies such as the highly popular Mr. Vampire (1985).

In the mid-1980s Hung started Bo Ho, a film company that operated under Golden Harvest. The movies made by Bo Ho include the aforementioned Mr. Vampire (1985), and also On The Run (1989).

Hung was also part of the popular Lucky Stars, a group who made a series of comedy kung fu movies.

In the late 1990s, Hung starred in an American television series by CBS called Martial Law (1998–2000), with Arsenio Hall as his costar. Reportedly he recited his English dialogue phonetically.

Hung is one of the celebrities honoured on the Hong Kong Avenue of Stars.

Hung is known for his distinctive (large) frame. Despite this, he is a surprisingly agile and formidable martial artist.

He had two daughters and two sons, Jimmy, Kimmy (some site Sammy), Timmy, and Stephanie, with Jo Yuen Ok whom he grew up with in martial arts training school. He later divorced Ok to marry actress Joyce Godenzi Timmy Hung also works as an actor with TVB and appeared in the film Osaka Wrestling Restaurant.

He is a grandchild of archetypal martial-arts actress Zhi-Gong Chen.