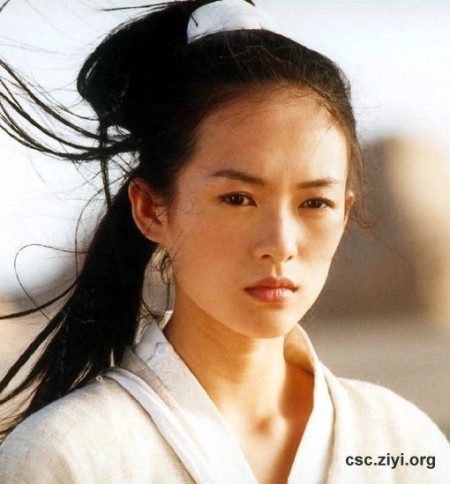 Zhang Ziyi (章子怡; pinyin: Zhāng Zǐyí) (born February 9, 1979 in Beijing, China) is one of the most well-known Chinese film actresses working today, with a string of Chinese and international hits to her name. She has worked with renowned directors such as Zhang Yimou, Ang Lee, Wong Kar-Wai, Seijun Suzuki and Rob Marshall.

Born in Beijing, China, Zhang joined the Beijing Dance Academy at the age of 11, and at 15 she entered China’s prestigious Central Academy of Drama (regarded as the top acting college in China).

When her parents suggested she go to the dance academy, Zhang was skeptical. While at the boarding school, she noticed how catty the other girls were while competing for status amongst the teachers. She would cry each night and morning, and on one occasion, ran away from the school.

At the age of 19, she was offered her first role in world renowned director Zhang Yimou’s The Road Home, which won the Silver Bear award in the 2000 Berlin Film Festival. Zhang further rose to fame due to her role as the headstrong Jen in the phenomenally successful Crouching Tiger, Hidden Dragon, for which she won the Independent Spirit’s Best Supporting Actress Award and the Toronto Film Critics’ Best Supporting Actress Award.

Her first appearance in an American movie was in Rush Hour 2, but as she didn’t speak English at the time, Jackie Chan had to translate everything the director said to her. In that movie, her character’s name, “Hu Li” translated from Mandarin Chinese is “Fox”.

After this she went on to make Hero with her early mentor Zhang Yimou, which was a huge success in the English-speaking world and an Oscar and a Golden Globe contender. Her next film was the avant-garde drama Purple Butterfly by Lou Zhe which competed at the 2003 Cannes Film Festival. She went back to the martial arts genre with House of Flying Daggers, which earned her a Best Actress nomination from the British Academy of Film and Television Arts.

Showing her whimsical musical tap-dancing side, Zhang starred in Princess Raccoon directed by 82-year-old Japanese legend Seijun Suzuki who was honored at the 2005 Cannes Film Festival. She plays the leading role of Sayuri in the adaptation of the international bestseller Memoirs of a Geisha, with her Crouching Tiger, Hidden Dragon co-star Michelle Yeoh, as well as Gong Li and Ken Watanabe. The movie was produced by Steven Spielberg, directed by Rob Marshall, and released in December 2005. Zhang has received a Best Actress – Drama Golden Globe nomination for her role.

Zhang has also been known to sing, and was featured on the House Of Flying Daggers Soundtrack with her own musical rendition of the ancient Chinese poem Jia Rén Qu (佳人曲, The Beauty Song). The song was also featured in a scene in the film.